I was in Asheville, NC recently and was able to see three great wood art shows of which I plan on writing three blog post reviews. This first one is on the Fine Art of Wood: An International Invitational Exhibit of Woodturning, May 28 to September 6, at the North Carolina Arboretum. The show was facilitated with the help of the American Association of Woodturners as well as their local chapter the Carolina Mountain Woodturners.

The work in this show was truly exceptional, many of the top turners, worldwide, submitted work and I found it to be a real education in getting an overview of who's who in the turning world. Often when I go to a show I admire a lot of the pieces but there is usually one piece that stands out for me as the most captivating. In this show I couldn't pick a favorite. I've tried to do it but found that the attempt only resulted in a fifteen minute discourse about five or six different pieces.

With that said, this first piece is by the renown David Ellsworth, one of the godfathers of the modern woodturning movement. I like how he labeled the materials, "wood," because if you look at the piece, it just may have been some random piece of rotting wood pulled from an old wood pile, full of holes and mold/fungus but then turned (pun intended) it into an elegant vessel that transforms defects into beauty. The commonness of his material contrasts with and elevates his design. 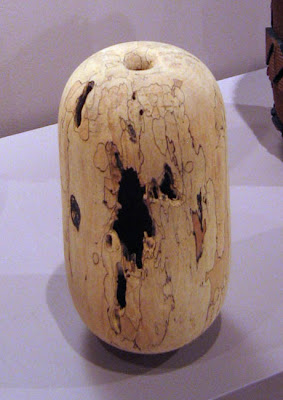 In seeing the show I was very happy to learn about the work Graeme Priddle, a New Zealand artist who's work has been greatly influenced by Maori culture. The elliptical scars on its body really caught my attention because they remind me of trilobites and, besides being a lover of trilobites, I think they, along with the mat black color (from burning?) give it a real ancient relic look. But I also love the tusk like wood on the sides that utilize the heart and sap wood perfectly. My Asheville friend and chauffeuse for the day said she thought this was the most powerful piece in the show and I think she is right. It is small but conveys something really mystical. I had thought that the title might have referenced Maori culture but in checking with Graeme it turns out that it refers to the largest of New Zealand's tree ferns, Cyathea medullaris (Interestingly, I checked a second time with him to find out why it is called Mamaku Vessel if there is no Mamaku in the piece and he said he just likes the tree so much and wanted to dedicate the piece to it. And having seen pictures of it on line, I agree, it is a great tree. In fact, when I saw the image I had a flash back to a dream I had about 25 years ago, looking down into a valley and seeing what I thought was a forest of beautiful palm trees but I now realize they were Mamaku. I had also thought I was in Pakistan but I now know that the dream was set in New Zealand). 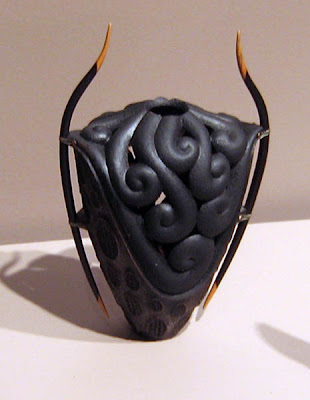 Mamaku Vessel
pohutukawa, mulga, copper, metallic thread
Graeme Priddle
Similarly, Jacques Vesery's piece, Second Sister from the Sky Forest, has a mystical feel to it, as if it is an ancient vessel that was left behind in the forests by a forgotten Indian culture, enveloped by moss or lichen but still retaining its beautifully executed original form. 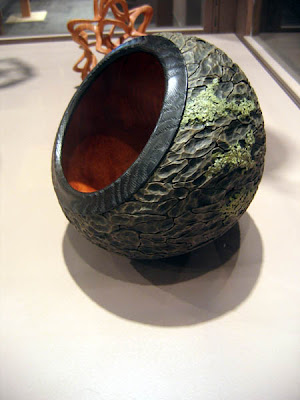 Second Sister from the Sky Forest
madrone burl, curly oak, mica, acrylic
Jacques Vesery
Undulation by Tucker Garrison is just another of the many pieces in the show that just make you wonder, "how was that done?" I find the most amazing part about this piece being that he was able to maintain the same dimensions of the wood throughout all the undulations. 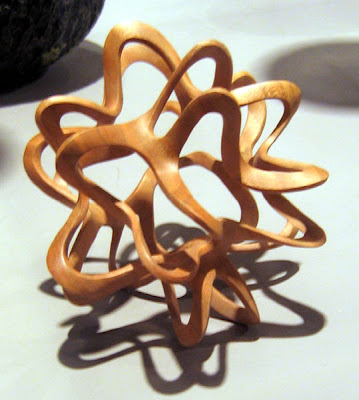 Undulation
cherry
Tucker Garrison
Andi Wolfe' Tesserae serai is both beautiful and fascinating. It probably isn't total coincidence that it reminded me of a pine cone when I first saw it because Andi is a plant systematics research scientist at Ohio State University and she uses plant biology for much of her inspiration. As she says in her blog post, this piece was inspired by the "microscopic landscape of seed coats." The title of the piece translates to "mosaic palace" and by bleaching the wood, she gave it a palatial feel. 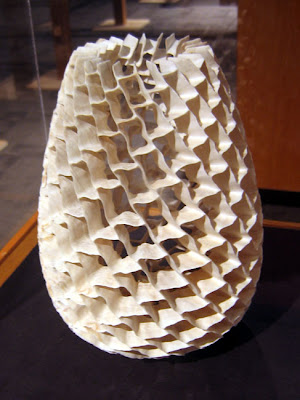 Tesserae serai
Spalted Maple
Andi Wolfe
While looking at this piece by Hans Weissflog, a member of the Carolina Mountain Woodturners, Joe Ruminski, thankfully came over to talk to me about it and help to explain how it was made. The precision of this piece is breathtaking and it is hard to believe it wasn't made by some high tech computer aided lasers or routers, like Rich Tannen's work, but Joe assured me that it was all done on the lathe by hand and with only the aide of interior and exterior molds that he uses to mark the lines. If you can't tell from the image, the concentric circles on the inside and outside are perfectly cut only halfway through and with the same width for each circle. 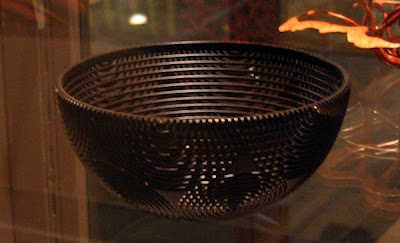 Half Circle Stars Bowl
African blackwood
Hans Weissflog
In the category of trompe l'oeil sculpture is David Nittman's Raya de Negro. Although it looks like a woven basket, it is actually a wood turning that has been burned and dyed to create the pattern. This and the other piece he had on display at the show were both influenced by Native American designs but his website shows "baskets" that are influenced by African and Middle Eastern patterns. It is interesting that another artist, Lincoln Seitzman, also worked in the field of trompe l'oeil wood turned baskets but that both artists developed a completely different process and style. Who would think that a field so specialized could be so diverse? 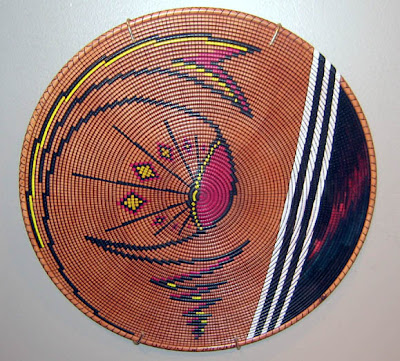 Raya de Negro
European pear
David Nittman
In this closeup it is still difficult to tell it is a woodturning. Regardless of whether it is trompe l'oeil or not, the design is beautiful art that stands on its own. 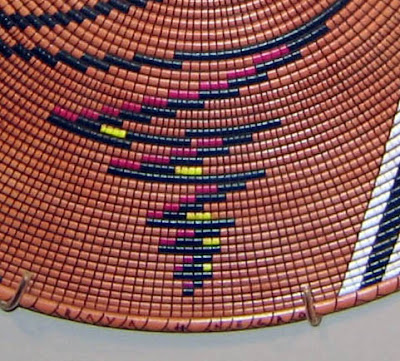 Raya de Negro (closeup)
I find French artist Christophe Nancey's Empreinte to be a variation on trompe l'oeil in that he seems to have transformed his medium into something that looks more like stone. It reminds me of a volcano or a lunar crater. 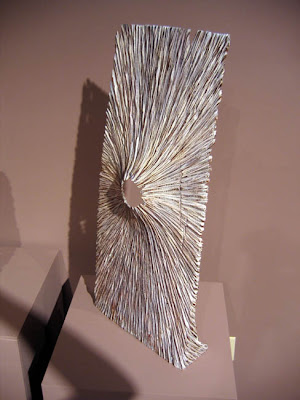 Another French artist, Alain Mailland, created this great piece (apologies for the poor image), Octopus Garden. It is a good example of how he uses negative space to create weightless pieces that reference both ocean and floral imagery. It is all very organic but also thematic. As great as this piece is, I highly recommend checking out his website -- he has work on it that makes this look like it was made by an amateur weekend turner. 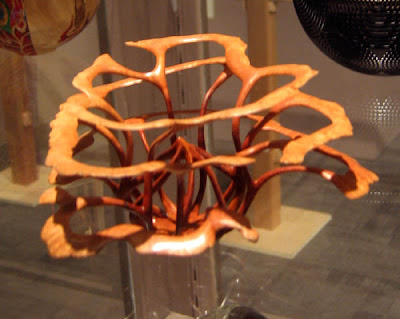 Octopus Garden
Alain Mailland
Binh Pho's Day Dream is a good example of how he integrates light and lightness into his work. It almost seems as if he is using paper rather than wood. I also like how he achieves balance through asymmetry, much like Caulder but not at all like Caulder. 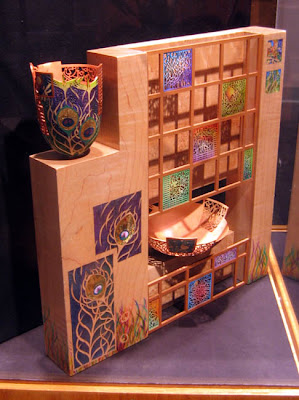 The impossibly thin finials on Cindy Drozda's pieces are stunning. In reviewing her website I found it interesting that much of it is dedicated to her cats but her work seems to be decidedly un-cat friendly in that I can't imagine anyone with a cat being able to live with these sculptures. I guess that is why people make cases. 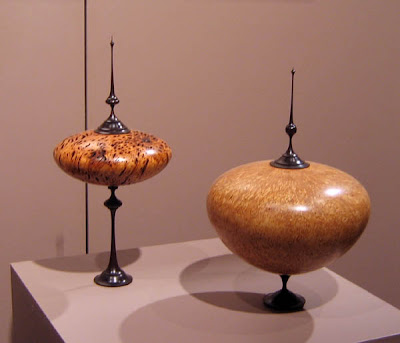 Metis (leftside)
eucalyptus gum vein burl, African blackwood with 4mm garnet
Green-Conscious (rightside)
masur birch, African blackwood with 4mm chrome diopside
Cindy Drozda
When I first saw Darrell Copeland's Enlightened, I was drawn to the gorgeous color and I loved the texture he carved into the surface (you can't see from this image but they radiate out from an off-center point) but in running into Joe Ruminski I was able to also learn that Darrell used seven colors of paint to get the effect (when I looked again, I noticed the variations, they really blend together well and must have taken a lot of time to create the effect) and that each of the squares are turned to create the concave shapes. It is a very beautiful and unique piece that combines painting and sculpture that is minimalist in form and color but complex in detail and execution. 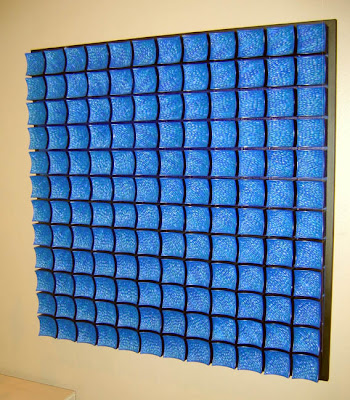 Enlightened
cherry, acrylic
Darrell Copeland
Although an accomplished woodturner, this piece by Christian Burchard is one of the very few (only?) pieces in the show that didn't have any turning element to it. His work shows a real love of wood because he is just laying it out there -- "simple," raw, and naked. It really exemplifies the concept of wood as art as much as any work that I have ever seen. 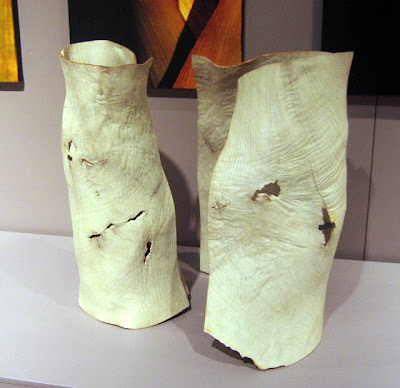 A Certain Attraction
Bleached Madrone Burl
Christian Burchard
In 2009 he won the Society of Contemporary Craft's Founder's Prize and as part of the award they he made a video describing his process. I find it fascinating to watch because he shows how much work, and how much life, has gone into making something that looks so simple.


This final piece that I'll highlight is by Douglas Fisher, an artist from British Columbia who carves Native American designs into wood turned disks. His work is an interesting contemporary variation on a traditional art. In this piece I particularly like the off-set circles that frame the design, they give the piece more life, as if you are looking into a creatures eye and it is about to blink closed. 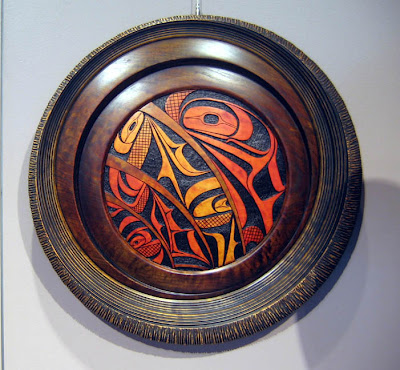